She has put in everything… all she had to live on. 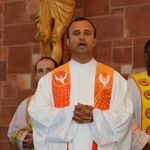 The readings this Sunday talk about the need for generosity of heart. The two widows represented in today’s first reading and the Gospel are the unlikely people who could be generous. They were both poor, were barely sustaining their lives and probably would have died of starvation as they had nothing to pay for their food.

Despite this reality, they do something extraordinary: they give up what they have, even the little they have, for a greater cause. And both the prophet Elijah and Jesus praise them for their generosity.

The Gospel today draws our attention to two kinds of people. The first part of the Gospel speaks about those people, who are show-offs, who are busy towards grabbing attention of the people towards themselves. It is all about ‘me’. It is all about ‘my’ achievements. It is all about ‘look at me’. But the second part of the Gospel challenges that view with the example of this poor widow, who gives ‘all that she had’, and probably goes hungry that day. The focus here is on the other and not on oneself. She does not even think of grabbing attention to herself rather doing something good for the other.

In our lives too, quite often we have the urge to grab attention of the others towards ‘ourselves.’ We want to be known for what we have done and what our achievements are. We want to show off our position in the society and climb up the ladder of reputation. And very often we want to be known in the public and be in the limelight. But is that why we are here? Is that our purpose of life? Is that what makes us who we are? I think it is a serious question for us. We are supposed to be people who are humble in the presence of God. We are learners on our journey. We are called to reach out to people around us, rather than looking for self-glory. We are called to share what we have, even though it hurts.

The widows in the readings today didn’t have to do what they did. They could have chosen to look after themselves rather than parting with their meagre possessions, but they did something extraordinary. That action of doing something extraordinary, in an ordinary way, shows us the value of generosity. Generosity is not giving out what is extra, but giving out what is our own, part of our own. It is ‘sharing’ rather than ‘giving’.Let us pray today that we be able to be like these widows from the readings, who were praised by Jesus and Elijah for their generosity and pray that we too will be able to follow their example in our lives.