Fr Kevin Cantwell SVD celebrates 60 years as a member of the Society of the Divine Word this year, and says his missionary zeal is as strong as ever.

Fr Kevin was born in Tully, North Queensland on October 14, 1927 and spent most of his childhood in Cairns. He was educated at St Monica’s school by the Sisters of Mercy and then at St Augustine’s, by the Marist Brothers.

In 1942 his school was evacuated from the coast because of the Japanese advances through New Guinea and the Solomon Islands and he became a boarder at Lake Barrine, situated on the Tableland behind Cairns.

As a 12-year-old, Kevin’s parents were approached by the local priest to see if he was interested in entering Queensland’s newly opened Banyo seminary, but at the time felt that he had no vocation.
However, time spent in The Legion of Mary as a teenager, followed by membership of the St Vincent de Paul Society when the family moved to Brisbane in 1947 helped foster a vocation.

“Then early one morning, while studying business law, out of the blue, I decided I wanted to spend the rest of my life as a missionary,” he says. “I went to St Vincent’s Seminary, Marburg in Queensland from 1949 to 1952 as a student and novice. I gave two weeks’ notice at work, dropped everything else, and in two weeks was in Marburg – and never doubted my vocation since.”

From 1952 to 1960, Kevin studied in the USA, first at Epworth, then Techny and finally Washington DC. It was during this period, which he recalls as being a sometimes lonely time, that he was ordained a priest in 1959.

Fr Kevin was appointed to St Vincent’s Seminary, Marburg from 1960 to 1969, and carried out a range of duties, including Director of Brother Candidates and Novices and Rector.
In 1970 he was elected Provincial of the SVD Australian Province, an experience he recalls as “a busy time!”

“As Provincial, my policy was to keep only administration and formation people in Australia, along with the ageing migrant priests who cared for the influx of new immigrants, while urging the younger confreres to ask for a mission appointment,” he says.

“At that time, in the 1970s, Australian parishes were well cared for by their parish priests and assistant priests. There were no multicultural parishes in those days, so I did not want our people tied down in Australian parishes. That’s all changed now, of course, and there is a need for us to work here in parishes as well as on overseas missions.”

After 16 years spent in formation and administration, it wasn’t until 1976, when Fr Liam Horsfall took over as Provincial, that Fr Kevin, aged 48, asked for and received his mission appointment to PNG.
He arrived in PNG, about six months after Independence and was appointed parish priest at Marienberg on the Sepik River, without any introduction and with instructions from Bishop Leo Arkfeld ‘to make it an English speaking station!’

“There were no catechists and no church leaders on the station,” he recalls. 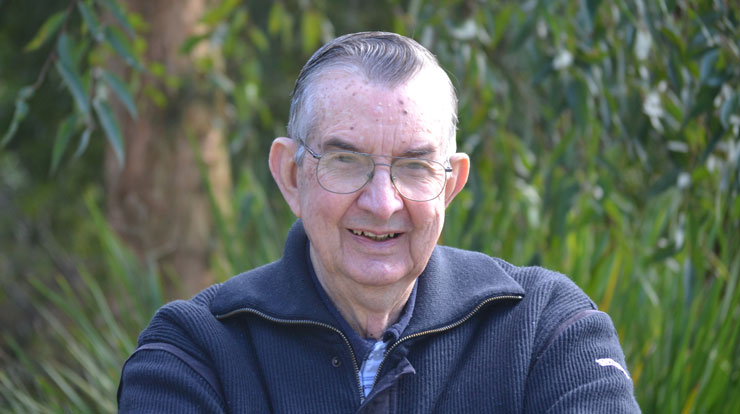 In 1979 Fr Kevin was struck down with suspected Blackwater Fever and after spending a week in a coma, he was evacuated to Australia for six months, before returning to take up an appointment in the PNG Highlands. Apart from working in the provincial office, Fr Kevin helped out at Minj, Banz, Kumdi and Mt Hagen. He was evacuated to Australia a second time with a blood clot in his left lung, but again returned to PNG.

“In 2004, after a year of congestive heart failure, I decided it was time to leave PNG,” he says.

“My days are now taken up with my own ‘daily order’: meditation and prayer in the early morning, Mass, Breviary, and Rosary. My light reading comes in the form of the daily papers. Serious reading at present is Thomas Merton’s ‘Thoughts in Solitude’.”

When it comes to music, Fr Kevin likes New Orleans jazz and the Blues.

“In between times, I do some small jobs for our mission office, such as sort stamps donated for the missions; sometimes I help new-comers with their English language courses, and each morning I feed the local birds” he says.

“My main focus now is on World Mission and the need for Church renewal. I pray that it moves out of its comfort zone and enters the 21st century. I pray that the whole Church becomes imbued with apostolic zeal and that the whole Church begins to take seriously the Lord’s command to ‘go and teach all nations’. I feel sure if this were to happen there would be no shortage of vocations.

“My philosophy of life has been much in line with the words of a hit song of some years past: ‘You have to accentuate the positive; eliminate the negative; and don’t mess with mister-in-between’. When applied to spiritual matters, St Paul said as much in his epistles.”