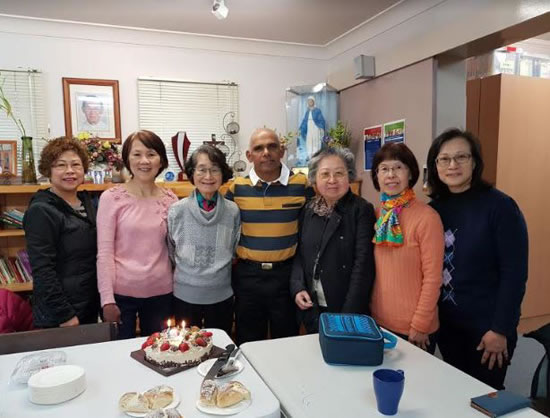 The Cantonese-speaking community in Melbourne has a new chaplain in Fr James Areechira SVD, who, although he is Indian, has spent 26 years of his missionary life living and working as a priest in Hong Kong.

Fr James says he first learnt Cantonese in 1988 when he took part in the SVD Overseas Training Program for two years in Hong Kong as a young missionary student.

“For two years I learnt Cantonese as a full-time student going to the Chinese University of Hong Kong from Monday to Friday,” he says.

After completing his Theological studies and formation in India, Fr James returned to Hong Kong as a priest and continued to study Cantonese for another six months at university before beginning his parish ministry in October 1994 as an assistant priest and then later being appointed as Parish Priest of two parishes and supervisor of their schools. He also served as a prison chaplain in Hong Kong for 21 years.

“During that time I was elected as SVD District Superior for two terms. So I was in Hong Kong for 26 years,” he says.

Fr James arrived in Australia in 2017 to take up studies in Spiritual Direction and to complete a Master’s degree in Theology.

He says learning Cantonese was hard when he first began.

“Cantonese is one of the most difficult languages in the world to learn,” he says. “It has no alphabet. Every word is called a character and it is like an alphabet. You learn how to write every word and just memorise it in your mind. To read that word you look at it and remember the pronunciation in your mind and say it out. There are almost 50,000 characters in Chinese.”

Other challenges include that Cantonese is a tonal language, with differences in tone signifying quite different words and meanings and it also has no tenses. One needs to understand the tense from the context.

Having become proficient in Cantonese during his years in Hong Kong, Fr James is now looking forward to his appointment as Chaplain to Melbourne’s Cantonese community.

“During this time of pandemic, I am having online Masses for the community and Zoom meetings with different groups.

Fr James says he sees his chaplaincy role as being like a Parish Priest, celebrating the sacraments and creating community.

The parish council is organising Zoom meetings on various topics to help Fr James and the community get to know each other. Some topics of these meetings have been, ‘Knowing Fr James’ and others were ‘Praying with Fr James’, ‘Questions with our chaplain’, ‘Our problems, with our Spiritual Director’ and others.

Fr James says he is happy to be involved with migrant chaplaincy, which is an important ministry of the Divine Word Missionaries.

“I feel this ministry is important because when people migrate to Australia, they can easily be confused and lost. They are starting in a new environment,” he says.

“First of all, prayer can give them a lot of strength to face the challenges of the new environment.

“Secondly, the mother tongue environment gives them a comfortable feeling and situation to pray better and express their prayers in their own language.

“Thirdly, the community members can understand each other and their struggles and give the necessary support to one another.

While second generation children of migrants integrate well into the local culture and speak English fluently, the first generation feels at home in their mother-tongue group, he says.

“As more and more people migrate to Melbourne, the migrant apostolate is very important.”