Diamond jubilee celebrates a life of blessing for Fr Larry 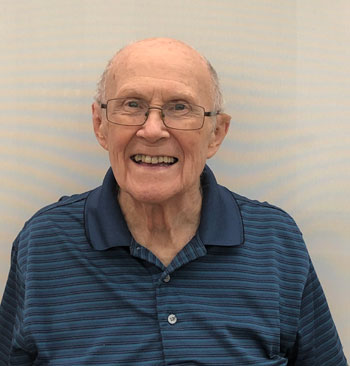 Fr Larry Nemer SVD says he can’t remember ever not wanting to be a priest, and as he celebrates his 60th jubilee of priesthood, he says he gives thanks for a lifetime of priestly ministry doing what he loves – teaching.

Fr Larry, who now lives in retirement at the SVD Marsfield community, celebrated his jubilee this month with confreres.

“It was a quiet day, reminiscing and thanking God for all the blessings given me,” he says. “We had a special cake after dinner.”

“I cannot ever remember not wanting to be a priest,” he says.

“In the 7th grade, my best friend said he also wanted to become a priest and he knew of this minor seminary in Wisconsin. I asked him to sign us both up.”

The friend changed his mind about becoming a priest, but young Larry never wavered.

“I went there not even realising it was a missionary minor seminary. But once I arrived there, I felt like I was in the ‘right place’ and my desire to become an SVD missionary grew from year to year,” he says.

He entered the SVD novitiate in Techny, Illinois, on September 8, 1950, having decided on missionary life after hearing stories in the minor seminary of what SVD missionaries were doing.

“It was a calling that I never seriously doubted in subsequent years.”

Fr Larry says he always loved studies and while he was in the seminary he found he enjoyed tutoring other students, especially those who were struggling with Latin. His love for teaching was awakened.

Fr Larry’s principal form of ministry over 60 years has been teaching in a theological school, including 10 years at Techny, Illinois in the United States and 20 years at Catholic Theological Union in Hyde Park, Chicago. After moving to Australia, he taught from 1990 to 2020 at the Yarra Theological Union/University of Divinity in Melbourne, Australia, with a break of six years when he was President of the Missionary Institute London, 1989-2004.

His graduate education in Church History and Mission Studies was done at the Gregorian University (Rome), The Catholic University of America (Washington, DC) and Cambridge University (UK).

His work in mission studies has also taken him to countries all around the world.

Fr Larry says he has been blessed to have spent his life doing what he loves.

“I have often said to my superiors that I don’t know if most SVDs get appointed to do as their full-time ministry the ministry they love doing best, but I have been so blessed,” he says.

“I LOVE teaching, seeing students learning and often outshining their teacher, and being challenged by them and taught by them new insights and new questions”